Water conservation technology of today goes far beyond low-flow appliances and fixtures. Many buildings are now being constructed with onsite non-potable water reuse systems (ONWS). These systems allow wastewater from the building or water collected on property from precipitation to be stored, treated, and reused for purposes like toilet flushing and irrigation. 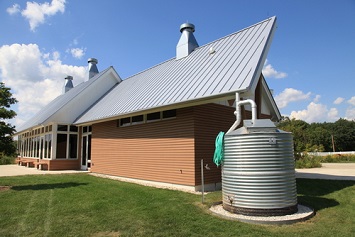 Water reuse is becoming more popular in green building design, and facility managers that adopt this technology can greatly improve their organizations’ sustainability profile and perhaps save some money in the long run by conserving water and energy.

Water Recycling: An Efficient Use of Resources

Most buildings are connected to public water systems, where potable water (i.e., water fit for human consumption) is distributed from a central municipal water treatment plant through water mains and piped into buildings. However, in recent years, many architects, engineers, facilities managers, and sustainability professionals have realized that using such high-quality water for all kinds of uses is not the most efficient use of the world’s water resources.

Water reuse happens in nature continually—there is a finite amount of water on the planet, and all of it has been reused many times over. Maybe we should follow nature’s example, especially when reused water can be treated so that it is safe for many purposes.

What Are the Incentives for Reusing Water?

The price of water is generally low. So, when most facilities can “afford” to use as much water as they wish, what are the reasons to install an ONWS? Reusing water that is used or collected on your property is a powerful strategy to reduce both water and energy consumption.

We know that water is a limited resource. But the changing climate and the common practice of over-pumping groundwater means that water scarcity is quickly becoming an issue in all areas of the country—not just in those that are historically drought-prone. Furthermore, in areas with booming populations, the water system infrastructure may be stressed as it tries to meet the high demand.

Another reason for using an ONWS is the large amount of energy required to pump and transport water over large distances or great elevations. For instance, California’s Edmonston Pumping Plant consists of 14 motor pumps that each consume about 60 megawatts (MW) of energy to move 2 million gallons of water per minute across a nearby mountain range.

If your organization puts great value on public perception, an ONWS is a great way for your facility to be more sustainable and demonstrate your organization’s commitment to corporate social responsibility. Organizations that focus on sustainability or that obtain a green building certification, such as Leadership in Energy and Environmental Design (LEED) certification, are more efficiently using resources, and setting themselves apart from competitors in the marketplace.

Water that is diverted from the sewer system, collected, and stored has the potential for reuse. Depending on the type of water and its intended purpose, it may need to be treated (often using biological processes) and filtered. Reused water is usually considered nonpotable and is most often used for purposes such as landscape irrigation and toilet flushing.

The consumption of reused water results in a reduction in potable water demand. The two main types of water that are reused are on-site alternative water and wastewater.

Rainwater, or water from precipitation that does not touch any surfaces, requires the least amount or sometimes no treatment. In most jurisdictions, it must be treated if the reused rainwater has the potential for human contact. There are many rainwater collection systems on the market suitable for a variety of commercial building types. Capturing rainwater has the added benefit of reducing runoff from buildings. Stormwater, or water from precipitation that touches a surface (usually the ground level, but it could also be the roof) may potentially be contaminated from site-specific sources, including oil, dirt, and debris. Therefore, it will likely need to be treated.

Wastewater that is treated and reused is often called recycled or reclaimed water. What was once a burden that needed to be disposed of, for buildings with an ONWS, this wastewater is considered an asset. However, treating and redistributing this water requires significant infrastructure. This technology can be installed during a retrofit of an existing building or can be integrated into the design of a new building.

There are two types of wastewater that have reuse potential—graywater and blackwater.

Graywater is generally defined as all used water except the water from dishwashers and toilets. In some areas, graywater may be used for subsurface irrigation without treatment, but any other use requires treatment. Blackwater is used water from the building that includes the water from dishwashers and toilets. Since blackwater contains organic matter and possibly disease-causing pathogens, it requires advanced treatment. Blackwater reuse is the most difficult and expensive to achieve using on-site systems.

ONWS are an added up-front cost, but these systems often save the building owner money over time. For instance, the San Francisco Public Utilities Commission headquarters, with its on-site graywater and blackwater treatment systems and rainwater harvesting system, uses 60 percent less water than a similarly sized building. The building has been used as a case study and model for future green buildings.

The U.S. Environmental Protection Agency (EPA) has published water reuse guidelines for those interested in the practice since 2004. But in February, the agency announced the development of its Water Reuse Action Plan, an action that formally recognizes water reuse as a critical component in integrated water resources management. According to the EPA, the goal of integrated water resources management is “reduced discharges to receiving waters and reduced reliance on surface and groundwater supplies to meet water demands.”

While regulation of building water reuse on the federal level may be years away, some local building codes in drought-prone areas already require water use efficiency, with some, like CalGreen, encouraging on-site water reuse. In the future, more and more buildings will be built with complex ONWS, and facilities managers will have to know how to manage these systems.