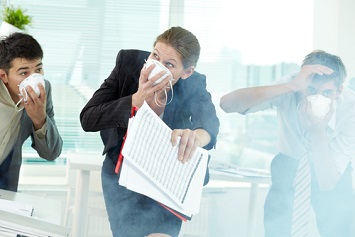 At a U.S. Postal Service (USPS) mail sorting facility in Des Moines, Iowa, a complaint-based Occupational Safety and Health Administration (OSHA) inspection revealed some issues with the facility’s emergency preparations. In addition to their lack of preparation to face an emergency, the employer is now facing $119,000 in proposed fines. Worse, similar hazards were cited at other USPS facilities in 2011, 2012, 2014, and 2015, so USPS hasn’t been learning from its own mistakes. That doesn’t mean you can’t do so, though. Take a look at your emergency preparedness, and make sure you’re not making these mistakes.

The purpose of fire walls and fire doors is to prevent the spread of smoke and fire from one part of a building to another for long enough that people in the protected area can escape. Some fire doors are kept closed during normal work conditions—the fire doors that protect stairwells are normally kept closed, for example. Others are designed to close when a fire is detected—fire doors in corridors that are magnetically held open, for example, will release and close automatically in the event of a fire.

The mail sorting facility had a mechanically-operated fire door between the vehicle parking garage and the mail sorting area. When OSHA inspected the facility, the Agency found that the door’s operating mechanism was rusted, and birds had nested within it in violation of 29 CFR 1910.37(a)(4), as well as applicable fire and building codes. In the event of a fire, the door would not have protected anyone.

Action item: Inspect your fire doors, and make sure that they are operating properly. As with all inspections, make sure you document it!

Exit routes—the path of travel that workers must follow to escape the building in case of an emergency—and exit doors, through which they leave, must be kept clear at all times. After all, it is the nature of emergencies to strike without warning. But open space in a workplace is difficult to maintain. It’s so easy to just move that old office furniture out to the hallway, temporarily; to line the corridor with bookcases and file storage; to stack the warehouse overflow in the aisles until some of that inventory moves. As a result, exit travel paths can easily become blocked.

Worse yet, the never-used emergency exit door at the end of the back hallway is out of the way of ordinary travel. Stacking and storing items there—temporarily, of course!—is even easier than stacking them in hallways and corridors. Or, in some facilities, these doors may become a focal point for loss control; it only takes one or two dishonest workers slipping merchandise or tools out the emergency exit door to a friend to convince management that locking or blocking those doors might be worthwhile.

Whatever the cause, blocked exit routes slow down workers who are trying to escape an emergency situation, and blocked doors can leave them trapped and helpless as death approaches. At the USPS facility, OSHA found exit routes obstructed by mail carts and emergency doors blocked by carts and parcels, which was a violation of 29 CFR 1910.37(a)(3).

Action item: Walk your emergency exit routes, and make sure that both the route and the door at the end of it are clear and functional. Do this on a regular basis to ensure that exit routes and doors stay clear.

A clear emergency exit route won’t do workers any good if they don’t know where to go. In an emergency, people tend to freeze, so they need to know what to do without having to think about it—that means training. But at the mail sorting facility, OSHA discovered that no one had reviewed the emergency action plan with employees in violation of 29 CFR 1910.38(f)(1).

Action item: All workers should be familiar with your emergency action plan, including how they will be notified of an emergency, at least two safe routes of escape from the building, and where they can shelter-in-place, if needed. If they have additional roles to play in an emergency, such as shutting down equipment or assisting disabled coworkers or plant visitors, they must be trained in those duties as well. Make sure that all new workers and all workers who are newly reassigned receive training—and if your plan changes, retrain everyone who is affected by the change.