As the COVID-19 pandemic continues and various stages of reopenings occur, the threat landscape is dramatically expanding, which is compounded by global geopolitical issues such as the war between Russia and Ukraine. This perpetual state of volatility impacts the ways businesses operate and their ability to plan ahead to mitigate risks. According to Ontic’s 2022 […]

Update 11/15/21: The death toll has risen to 10 after a college student and 9-year-old boy critically injured at the event later died. Over the weekend, tragedy unfolded at NRG Park in Houston, Texas, when eight young concert goers, between the ages of 14 and 27, were killed when reported crowd surges occurred during the Astroworld […] 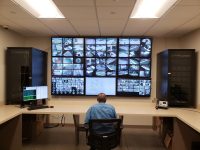 The Star of Hope Mission in Houston, Texas, has installed hundreds of Hanwha Techwin security cameras and a Wisenet WAVE video management system (VMS) to help secure facilities for unhoused men, women, and children. In this case study, Star of Hope Mission Director of Facilities Development Ike Kimmel and the security tech company discuss the […]

Workplace violence is not industry specific and can happen to workers in any facility. With that in mind, the Occupational Safety and Health Review Commission (OSHRC) states that workplace violence is a recognizable hazard and reminds employers that they are responsible for protecting employees from assaults and homicides at their facilities.

How do you install new security devices or systems in a building with multiple tenants? If you’re only managing one part of a facility, how do you get the landlord’s buy-in to make important changes to your part of the building? How do you keep your employees safe in a facility with multiple access control […]

The security industry is quickly evolving with the emergence of new technology. As we near the end of 2020, we are seeing new trends that will shape the future of physical security. By identifying access control trends for 2021, facility managers can properly prepare to meet both business and end user needs.

It can be easy for vendors to get overly familiar with their customers and perhaps try to bypass security policies related to access control, waiting time, or entering parts of the facility they really don’t need to be. Therefore, all employees should be reminded to follow established protocols for vendor interactions.

An active shooter is an individual actively engaged in killing or attempting to kill people in a confined and populated area; in most cases, active shooters use firearms, and there is no pattern or method to their selection of victims. While it’s very tempting to think “it could never happen here,” training for the worst […]