Certain facilities have an “invitee relationship” with the public, and they actively encourage people to use their hotels, bars, restaurants, movie theaters, or nightclubs. Beyond just the hospitality industries, other public facilities include hospitals and medical clinics, stores and malls, churches, libraries, and parks. Facility managers and their security teams need to know how to […]

While some facilities rarely see clients or customers because they have no need to come to the site, other buildings for public agencies and private sector companies get a lot of foot traffic. It’s important to set up zones of access based on the need to control how nonemployees go to certain places inside the […]

In 2017, there were 10,000 deaths caused by natural disasters worldwide. Many of those occurred while people were in their workplaces. In addition, research shows that the number of recorded natural disasters has increased over the past century. So, it’s still critical, perhaps now more than ever, that our facilities and employees are well-prepared for […]

On January 18, 2019, President Trump signed a bill providing another 15 months of funding for the Department of Homeland Security’s (DHS) Chemical Facility Anti-Terrorism Standards program (CFATS). Trump signed the bill the day after the program was set to expire. News of the extension provides a moment to examine one of the more unusual […]

Mass notification systems utilize a number of integrated communication devices and software to alert building occupants about a potentially dangerous situation and facilitate the proper action and response. They represent a very beneficial added layer of life safety protection.

Healthcare facilities are hectic workplaces that are fraught with hazards, not the least of which are potent, potentially toxic drugs. As such, an American Society of Clinical Oncology (ASCO) panel began work on developing standards for the safe handling of hazardous drugs in healthcare facilities. The expert panel endorsed three sets of existing guidelines and […]

Dangerous chemicals necessitate adequate security to mitigate risks. If you are a facility with a chemical designated by the U.S. Department of Homeland Security (DHS) as a chemical of interest (COI), you may only have 60 days after taking possession of the COI to initiate a security screening process under the Chemical Facility Anti-Terrorism Standards […]

It’s that time of year again, when norovirus starts to rapidly spread through facilities across the country. According to recent statistics from the Centers for Disease Control and Prevention, somewhere in the ballpark of 1 in 15 Americans will experience a norovirus infection this year, meaning there’s a good chance your facility could be affected. […]

Severe winter weather, power outages, or other workplace emergencies can occur anywhere and at any time. How well prepared are you? A top official with the Federal Emergency Management Agency (FEMA) says certain elements of preparedness tend to be forgotten. Which ones? Find out here.

Continuing from yesterday’s post, here are some more tips to help ensure your employees are properly prepared for emergencies and disasters. 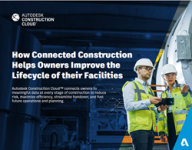 How Connected Construction Helps Owners Improve the Lifecycle of their Facilities