There’s a growing concern among healthcare researchers about bacteria’s ability to handle its booze. Recent studies highlight a potentially serious safety concern blossoming for healthcare facilities as certain forms of bacteria are becoming more tolerant of the alcohol used in popular hand sanitizers. 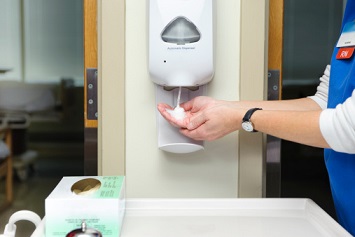 According to a study published in Science Translational Medicine, bacteria gathered from two Australian hospitals over an 18-year period appear to be more successfully surviving the alcohol commonly used in hand sanitizers. The research, which is reported on in more depth in this Ars Technica piece, was led by infectious disease expert Paul Johnson and microbiologist Timothy Stinear of the University of Melbourne.

Hospital-acquired infections have become a top concern of healthcare facilities worldwide, and sanitation efforts have been strengthened constantly in order to deter their effects. However, Johnson and Stinear, along with their colleagues, noticed a troubling trend in these infections—while some particularly nasty bugs like methicillin-resistant Staphylococcus aureus (MRSA) seemed to decline in the wake of alcohol-based sanitizers, other germs appeared to be becoming resistant and even thriving.

The findings of their study are summarized thusly:

We have proposed here that the significant positive relationship between time and increasing alcohol tolerance is a response of the bacteria to increased exposure to alcohols in disinfectant preparations and that the more tolerant strains are able to displace their less alcohol-tolerant predecessors.

These more tolerant strains are Enterococci bacteria, with a species called Enterococcus faecium (or E. faecium for short) causing the most concern among researchers. Ars Technica notes that Enterococci bacteria “are usually harmless occupants of the human gut but can become opportunistic pathogens that lurk in hospitals and pounce on vulnerable patients,” and E. faecium in particular “has become a leading cause of hospital-acquired infections and often carries resistance to multiple antibiotics, including a last-line drug called vancomycin.”

Hand sanitizers with a common 70% alcohol solution (usually isopropanol or ethanol) are becoming less effective at killing off the bacteria. While more research will certainly be conducted to understand the developing alcohol tolerance, Johnson and Stinear’s team concludes in its study:

The development of alcohol-tolerant strains of E. faecium has the potential to undermine the effectiveness of alcohol-based disinfectant standard precautions and may, in part, explain the increase in [vancomycin-resistant Enterococci] infection that is now widely reported in hospitals in Europe, Asia, the Americas, and Australia.