Heating and Cooling, Maintenance and Operations

California regulators recently adopted an emergency standard requiring employers to protect workers from wildfire smoke. There are exemptions to the standard, however, and building air filtration is a big one. It’s an opportunity for facilities managers to help their organizations both save money and keep workers healthy. 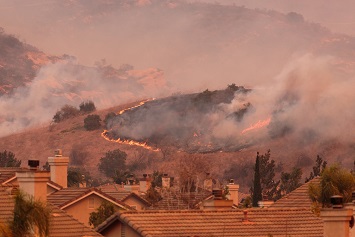 The California Occupational Safety and Health Standards Board July 18 approved an emergency “Protection from Wildfire Smoke” standard. The emergency regulation is expected to go into effect in early August.

The emergency regulation applies when the Air Quality Index (AQI) for airborne particulate matter two and one-half microns or less in width (PM 2.5) is 151 or greater, and where employers should reasonably expect that employees could be exposed to wildfire smoke.

Exemptions from the wildfire smoke standard are:

Once the emergency regulation takes effect, it will be effective for one year. The California Division of Occupational Safety and Health (Cal/OSHA) can now begin the regular rulemaking process for a permanent standard or file for emergency readoption. Only two emergency readoptions are permitted under state law. Cal/OSHA announced an August 27 advisory committee meeting seeking input on a permanent wildfire smoke standard.

If the requirements for exemption above are not met, employers must take the following steps to protect workers from wildfire smoke exposures:

Other requirements for reducing workers’ smoke exposure include reducing work times in unfiltered air, increasing length and frequency of rest breaks in an area with filtered air, and reducing physical exertion of work to lower heart and respiratory rates.

You may well be thinking: My facility isn’t in California, so … so what? Well, a recent bill at the federal level mirrors this one. The U.S. Occupational Safety and Health Administration (OSHA) would be required to develop a federal wildfire smoke standard if the “Farmworker Smoke Protection Act of 2019” (S. 1815) becomes law. OSHA would have to begin rulemaking within 90 days of the bill’s enactment.

Now, the bill makes no mention of employers other than agricultural operations and no employees other than farmworkers, but it does indicate that this safety issue is receiving attention at the national level. Should wildfires continue to increase in frequency and intensity, other states may follow suit with similar standards as well. And, in the end, it is not unreasonable for facility managers nationwide to be prepared to keep smoke out of the air (and workers’ lungs) in their facilities.