The summer of 2018 was particularly devastating for much of the wildfire-prone western states. And though the drought has broken in some of the most devastated regions — helping to alleviate some of the immediate danger — wildfire risk remains high in 2019. The lessons learned from battling the Carr and Camp fires can hopefully help state and local governments, and facility managers and property owners, address some of the land use issues that helped these fires grow out of hand. 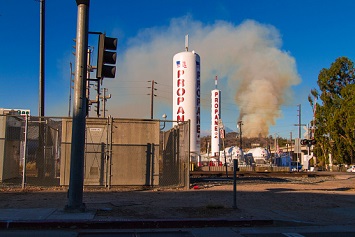 As the Carr Fire raged across Northern California last summer, firefighter James Bevins spent 2 weeks providing rescue support for helicopters dispatched to dump water and fire-retardant chemicals on the 230,000-acre blaze. Bevins and his crew were also responsible for “structure protection” in the area around Redding, California, a city of about 100,000 residents on the southeastern border of the fire. They had driven Truck 511 nearly 800 miles from their home station at Pinion Pines, Arizona, and spent their days removing brush, setting up fire sprinkler kits and spraying foam on buildings that could be in the fire’s path.

But they didn’t spend a lot of time on any given structure. They were often needed elsewhere, and so adopted a “prep and leave” strategy: readying a building for the coming flames and then moving on to protect others. At night, they bunked in retrofitted tractor-trailers with other crews, some from as far away as New Zealand, or camped out next to their truck.

Despite firefighters’ best efforts, the Carr Fire destroyed 1,500 structures — most of them in Redding — in the 5 weeks it burned in July and August. Almost 40,000 residents of Redding evacuated their homes and three firefighters were killed, including one in a 2,700-degree “fire tornado” with a base the size of three football fields.

Wildfires have been growing in size and number and fire suppression has grown correspondingly more complex and expensive. The largest 2 fire seasons since 1985 in terms of acreage were in 2015 and 2017, costing taxpayers $2.1 billion and $2.9 billion, respectively. Through mid-September this year, more than 7.3 million acres have been scorched nationwide.

Bevins has frequently traveled far from home during wildfire season. The difference, in recent years, is that instead of fighting wildfires thousands of acres from the nearest suburb, the Pinion Pines crew increasingly finds itself battling raging flame walls just miles from densely populated settings.

In the western United States, cities like Redding are growing and new residents are building in areas with plenty of trees and underbrush that can fuel fires. Rapid urbanization has also helped accelerate climate change, and the resulting fires have everything they need to cause destruction.

Where Are Cities Growing?

“It’s a little like the old philosophical conundrum: If a tree falls in the forest and there’s nobody around, is there really a noise or a sound?” Rose said. “So, if you didn’t have human population, how serious would a lot of disasters be?”

U.S. population growth in the last century has skewed heavily from rural to urban areas. In 1910, the split between rural and urban populations was nearly even. By 2010, more than 80 percent of Americans lived in an urban area, according to the U.S. Census Bureau. Those urban areas are growing faster in the West.

In California, a substantial portion of this growth is in urban centers like Los Angeles and the San Francisco Bay area. But big California cities are facing housing shortages, driving up the cost of housing and pushing development outside urban centers. California developers build up to 140,000 housing units each year, but California’s Legislative Analyst’s Office estimates 100,000 more units a year are needed.

“They basically have no available space to build within the confines of their cities,” said Kurt Henke, a former fire chief for the Sacramento Metropolitan Fire District who is a consultant to fire organizations and legislators.

“California has a lot of rural land mass,” Henke said. “The state is increasingly seeing housing tracts built in wildland.”

Where You Live Matters

Pinion Pines is a small fire district 113 miles southeast of Las Vegas. The station’s 22 firefighters serve 500 people over 22 square miles. The district boundaries cover terrain and vegetation similar to that found in wildlands across the West.

It doesn’t take much to ignite that underbrush. Lightning can spark it, but humans cause as much as 90 percent of wildfires, according to the National Park Service. Building homes in wildland exposes underbrush to fire starters: cars, lawn mowers, power lines. While Bevins’ home district in Arizona resembles the areas in California in terms of terrain and fuel, the proximity of homes to one another and the structure volume is much higher in places like Redding. 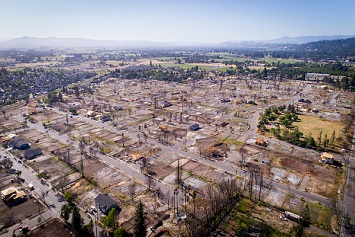 Urban Sprawl and Its Impact on Climate Change

Even in the 8 years Bevins has been fighting fires, he’s noticed a shift in the types of climate his crew faces.

“Everything’s just hotter and drier,” he said. “We’re getting less rain, but the same amount of lightning moves through the area with no precipitation behind it.”

Bevins said wildfires used to be contained at around 20,000 acres. Now, he said, it seems every fire Pinion Pines responds to grows to at least 100,000 acres.

The sprawl of cities has an immediate impact on the surrounding environment. Because concrete and asphalt retain heat, “urban heat islands” can raise temperatures substantially. Urban environments also have fewer trees to stop carbon sequestration. And sprawl increases commute times, putting more emissions into the atmosphere.

“Anything that mitigates greenhouse gas emissions is capable of reducing both types of damages from climate change,” Rose said.

Future of Wildfires in California

It’s unlikely California will get a reprieve from its record-breaking and costly wildfires. Fuel mitigation could take decades, according to Henke. Urbanization and growth in the West show no signs of slowing, and climate change will continue, absent a global strategy to reduce carbon emissions.

Spending more on suppression is needed in the short term, but Henke said the real solution is a long-term strategy that balances “tree mortality and forest management with the short-term need to fight these fires near urban areas.”