At a retail facility in Indianapolis, the new tenants wanted to create more space in the older storefront to make room for their new tattoo parlor. To do so, they tore out the walls around the sprinkler control room and finished by hanging drywall over the sprinkler riser and control valve. The only access they left was a small metal door inset into the wall below the level of the riser valve. They had, in effect, made it impossible for the facility manager to properly control or monitor the sprinkler system in that part of the building. 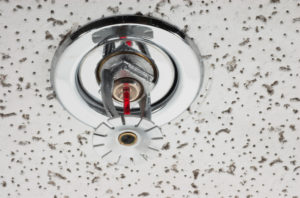 If you don’t, you could end up disabling your sprinkler system and putting your facility and your workers at risk. But, a lot of tenants don’t even know where the sprinkler controls are and have never given a thought to maintaining access to them.

Here are some reasons you should stress maintaining access and clearance around your fire sprinkler controls to the tenants at your facility:

You probably know you need to leave 18 inches around your sprinkler heads—but do you know that all of the valves and pressure gauges that control your sprinkler system also need to be fully accessible to the fire department and the fire marshal? If you block them off (by drywalling over them or by placing them behind a locked door, for example), you could be in violation of the fire code. Fire code violations can get your business shut down even if there’s no immediate hazard.

If you’re not able to access your sprinkler controls, your system is probably not being tested on a regular basis. Just like other failures to inspect fire safety equipment, this can cause you problems with regulatory agencies. It can also result in a failure to identify problems that could cause your sprinkler system to malfunction, creating a potentially hazardous situation.

If you don’t leave adequate access to your sprinkler system controls, and there’s a problem with your sprinklers—for example, if there’s a leak somewhere that triggers an alarm and the fire department shows up—the fire department will create the access it needs. Most likely, it will do so with Halligan bars or axes. Moreover, if you are in a building that has multiple tenants and the fire controls are accessed only through your space, a problem in another occupancy can lead to damage inside your space.

So, how do you do it right? You don’t necessarily have to have an entire room dedicated to your sprinkler controls. For smaller systems, a cabinet-style enclosure should be adequate. Local ordinances may vary, and you should check with your fire marshal—but as long as such an enclosure has fully opening doors that give access to all valves and gauges, is clearly labeled to indicate that it contains fire sprinkler controls, and can be readily opened by the fire department, you should be in the clear.