Using ambient air to cool and condense steam at electric power plants is a costly alternative to water cooling, however, energy companies are gradually adopting dry cooling according to the U.S. Energy Information Administration (EIA). Dry cooling or hybrid cooling—a combination of air and water—occurs in 3% of all U.S. thermoelectric generating capacity, says the EIA, most of which has come online since 2000. Though that currently a small percentage, the move by utilities away from coal-fired generation to natural gas could lead to an upswing in the use of air and hybrid cooling. 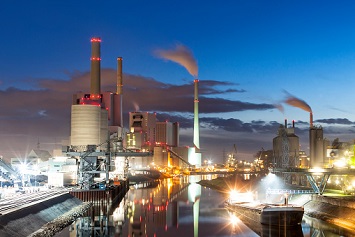 “Dry cooling systems tend to be more economical for natural gas combined-cycle (NGCC) plants because the amount of cooling needed is much less per megawatt hour than for coal or nuclear plants,” says the EIA. “More than 15% of operating generating capacity from NGCC plants in the United States use dry cooling technology. In the past five years (2013–2017), almost 4.3 gigawatts (GW) of NGCC capacity using a dry cooling system came online.”

While dry cooling is not the low-cost option, it allows companies to avoid complying with the EPA’s Cooling Water Intake (CWI) rule for existing generating plants and factories (August 15, 2014, Federal Register (FR)). That rule requires that facilities that draw in more than 2 million gallons a day for cooling obtain National Pollutant Discharge Elimination System (NPDES) permits that include requirements to reduce the impingement and entrainment of aquatic organisms. Once-through water also returns to water bodies at a higher temperature, another burden to aquatic organisms.

When the rule was promulgated, the EPA noted that of the 1,065 existing facilities subject to the rule (521 manufacturers and 544 power plants), about 40% were already implementing the technologies required by the action. Today, the EIA says that more than 61% of the thermoelectric generating capacity in the United States recirculates cooling water. Plants that use once-through cooling systems account for 36% of U.S. thermoelectric generating capacity, adds the EIA.

In July 2018, the U.S. Court of Appeals for the D.C. Circuit upheld the CWI rule against all challenges from industry and environmental groups. The court also upheld the biological opinion on the effects of the CWI rule, which was issued by the U.S. Fish & Wildlife Service and the National Marine Fisheries Service.

Currently, 83 power plants are operating dry and hybrid cooling systems in the United States, says the EIA. These plants support about 20 GW of steam-generating capacity. California has the highest number of plants with dry cooling systems (13), but Texas has the most dry cooling capacity (2.8 GW), closely followed by Virginia (2.4 GW).

As noted, dry and hybrid cooling capacity is most commonly found in NGCC facilities, which account for more than 83% of the operating dry and hybrid cooling capacity. According to the EIA, dry cooling systems tend to be more economical for NGCC plants because the amount of cooling needed is much less per megawatt hour than for coal or nuclear plants. Overall, more than 15% of operating generating capacity from NGCC plants in the United States use dry cooling technology. In the past 5 years (2013–2017), almost 4.3 GW of NGCC capacity using a dry cooling system came online.

The EIA’s summary of the prevalence of dry and hybrid cooling at power plants is here.