Lots of people have allergies—some people break out in sniffles when the pollen count is high; others can’t have pets because dog hair or cat hair makes their eyes swell up and water. But none of those allergies resemble the dramatic, life-threatening reaction that is anaphylaxis. As a facilities manager, you should know the risk to your workplace. In this article, we will cover the signs and symptoms of an anaphylactic reaction as well as how facilities professionals can properly prepare in order to avert a potentially deadly situation. 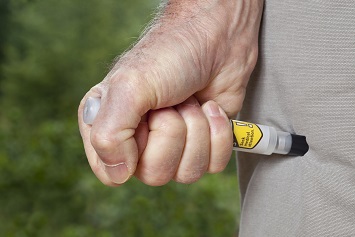 Anaphylaxis is a specific, extremely severe type of allergic reaction in which the body reacts so severely to an allergen that the individual goes into shock. Even if the first reaction is controlled with epinephrine, a second reaction called a biphasic reaction can occur up to 12 hours later.

Initial symptoms of anaphylaxis can look like milder allergy symptoms—a runny nose, a rash, or feeling unwell. But symptoms can then progress rapidly and affect multiple body systems. An anaphylactic reaction will involve one or more of the following symptoms:

Individuals who have a history of allergies or asthma, or who have had a severe allergic reaction, are at increased risk of anaphylaxis—but people who have never had a noticeable reaction, or who have always had mild reactions, can also have anaphylactic reactions.

For someone who is having an anaphylactic reaction, the treatment is a dose of epinephrine, administered quickly—and followed, in 20 minutes or less, with a second dose if the first dose is not completely effective. That’s where the EpiPen®—and less expensive competitors that are beginning to appear on the market—comes in. These devices are simple to use and inject a premeasured dose of epinephrine that can slow, stop, or even reverse the reaction, giving the individual time to get to the hospital and receive additional treatment to completely control the reaction.

Individuals can develop anaphylactic reactions to:

There are conditions under which workers can be exposed to these allergens on the job—or when they might encounter others who are having anaphylactic reactions in the course of their work.

When to Worry About Anaphylaxis

In any facility, concerns about anaphylaxis are threefold: 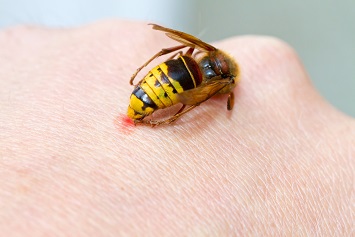 If workers at your facility are exposed to potentially anaphylactic allergens in the course of their work, or if there is an increased risk of anaphylactic reactions among customers, clients, or vendors, you should probably be prepared to deal with them. Here’s what you can do:

Accommodate workers with known allergies. Anaphylactic allergies are not a protected disability under the Americans with Disabilities Act, but accommodation is fairly straightforward and not expensive. For example, if you have a worker who has a known allergy to peanuts, you may simply need to avoid serving foods that contain or are potentially cross-contaminated with peanuts (check the labels) in the workplace and at official company functions. Remember to check your vending machines! You can also permit the individual to keep a set of EpiPens in the workplace.

Train workers to recognize an anaphylactic reaction and potential triggers. If someone who has been exposed to a known anaphylactic allergen begins to show symptoms of an allergic reaction, an immediate response may be the only way to save his or her life. Workers should know to:

Keep epinephrine injectors in high risk areas (as allowed by law). In outdoor work areas or other areas where workers may encounter biting or stinging insects; in food service areas; and in medical settings where latex, anesthesia, or other triggers may be present, epinephrine injectors should be available. Many schools keep injectors in the nurse’s office; some restaurants and public buildings are now stocking injectors alongside their automated external defibrillators or in their first-aid kits.

In order to keep epinephrine in the workplace, you’ll need an “entity prescription.” State laws on this vary, but almost every state allows K–12 schools to stock epinephrine, and an increasing number of states have passed laws allowing restaurants, amusement parks, sports arenas, and other high-risk venues to stock what is called “undesignated epinephrine”—that is, epinephrine auto-injectors that are not prescribed for a specific individual. Some states require the entity to be certified and have trained employees in order to keep epinephrine on hand.

For more information on stocking epinephrine in your facility, visit this page from Food Allergy Research & Education (FARE). Here you can find resources on epinephrine accessibility for schools, colleges, and universities, as well as laws regarding stocking undesignated epinephrine auto-injectors.